Before starting on this tutorial, we would suggest you follow steps 1-5 of the DTI tutorial and retain all the files you create. Two additional software tools are also required for this tutorial: ITK snap and Paraview, it might be convenient for you to download and install these now before you commence.

Firstly, in order to perform streamline tractography. We need to derive directional information for the tractography algorithm to follow. In this case, we will use the diffusion tensor. If you haven't fit the diffusion tensor to data before, follow parts 1-5 of the DTI tutorial. We will use the dt.Bdouble file which is the output of dtfit from part 5.

We use the ITK snap imaging tool to define a ROI in the middle of the corpus callosum: 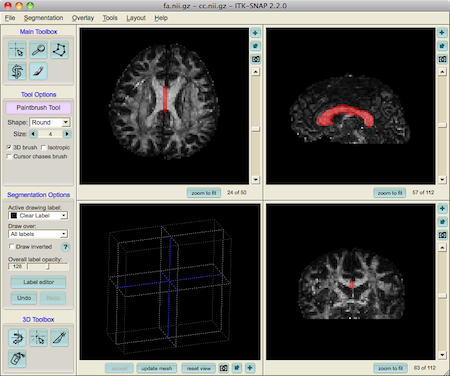 The ROI should be saved as a NifTi (.nii) file. In this example the file is named cc.nii.gz.

Now using the ROI we have defined and the diffusion tensor data from the dtfit command, we can do some deterministic tractography using the track command:

5.  Exporting streamlines to other file formats

The .Bfloat file produced by track is a raw binary file containing all the streamlines, as documented here. They can be processed and converted to images with procstreamlines. Tract-based statistics (eg, the average FA along a streamline) can be computed with tractstats.

Streamlines can exported to VTK polydata format with vtkstreamlines.

Paraview is one tool that can read VTK polydata as well as NIfTI images. Before we can visualise the streamlines in Paraview we need to convert the streamlines from raw format into a format that Paraview can load natively. 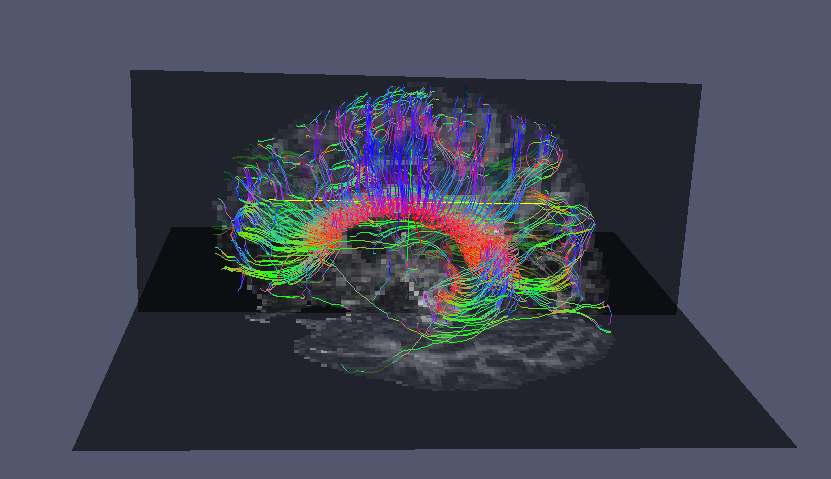