In steps 1-7, we use a human data set and go through the steps to reconstruct and visualize the tensor information, then we do similar reconstruction on some animal data. There is some overlap between the two examples, but in the animal data we look at additional details, and show how to fix the scheme file so that the orientation of the tensors is correct in the image space.

If you haven't already, download and compile Camino (instructions here). Add the Camino bin directory to the PATH so we can run camino commands more easily (adapt this for your system and camino installation):

An example human data set is available for download. We'll use this for the tutorial, but each step will be explained so that you can use your own data if you prefer.

The data is a zip archive containing three files:

The first step for processing DWI data is to generate a schemefile that lists the details of your acquisition. Camino accepts several types of schemefile, all of which are text files containing a list of numbers specifying the parameters of each diffusion weighted image in your protocol; one line per image. The simplest and most common schemefile has the following format:

You can specify the b-value in any appropriate units. Some Camino programs assume SI units, so we will use SI units here, such that b is in units of s / m^2. Most commonly in papers, the b-value is specified in units of s/mm^2. The example data has b=1000 s/mm^2 = 1E9 s / m^2. The choice of units for the b-values will dictate the units of the output tensors and mean diffusivity maps. Since we are s / m^2 for b, our diffusion tensors and mean diffusivity maps will have units of m^2/s.

Since we have a list of gradient directions from the scanner, we can build the scheme file using pointset2scheme:

The schemefile for this tutorial is also available here

The schemefile page has more details about the different scheme file formats.

More on this topic: Data I/O in Camino

Next we will convert the DWI data to Camino format using image2voxel:

We use the filename extension to indicate the data type stored in data files. For example, the extension .Bfloat on the file dwi.Bfloat indicates that the file contains big-endian floats (four-byte real-valued numbers). The first letter of the extension is either B or L, to indicate big or little-endian. The rest of the extension is one of double, float, long, int, short, byte, char to indicate the numerical type. We use this extension only for files in the raw binary format that Camino uses. The extension of raw data doesn't matter to Camino, most programs don't know if their data even has a file name (it might be piped in). Therefore it's up to you to name your files correctly and to make sure Camino is aware of any deviation from its default data types. Raw data produced by Camino is always big-endian. By default, most data is of type double, but DWI data is of type float. The man page for each program will tell you the exact format of its raw output. For further information. please see the data import page.

It is possible to skip this step and simply use the DWI data in NIFTI format below. However, using voxel-order data can be convenient when we want to parallelize the model fitting. Once the data is in voxel order, it can be easily split up (for example, by slice) and processed in parallel.

We are now ready to fit the diffusion tensor to the data using modelfit:

Equivalently, we could use the simplified dtfit wrapper:

Next, we compute fractional anisotropy and mean diffusivity maps.

Here we have used fa and md to compute the respective statistic, and voxel2image to create a corresponding image that we can open in ITK SNAP.

To examine the spatial orientation of the tensors, we compute the eigen system:

This can be loaded into pdview, so that we can check the orientation is what we expect. We'll look at an axial and a coronal slice, to ensure that the principal directions look correct in all dimensions. 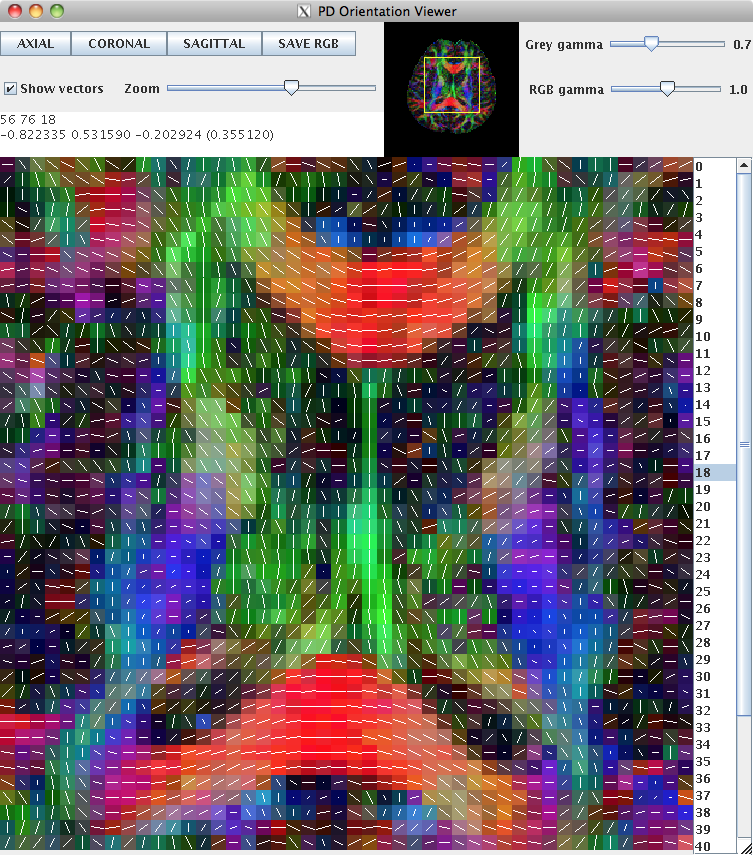 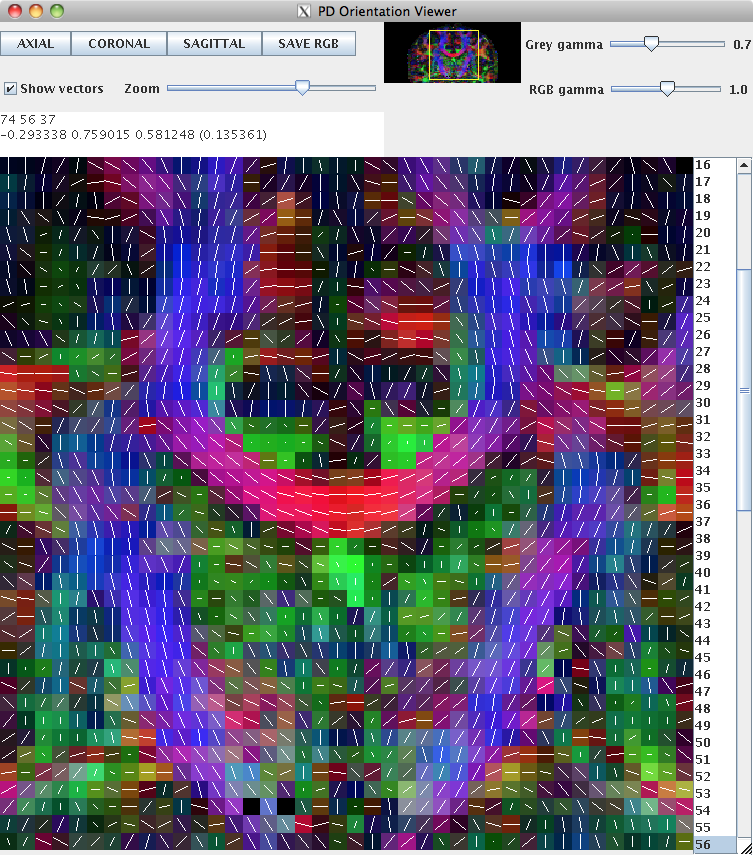 New data should always be checked in this manner to ensure that the scheme definition is correct. The definition of the scheme file is usually consistent across subjects acquired on the same machine with the same protocol.

Since the original data is in NIfTI format, we may wish to export the reconstructed DTs into that format. The voxel2image command won't work here, because it only produces a series of 3D images from voxel-order input. Using the dt2nii command, we can output the DT in the NIfTI format.

This produces nifti_dt.nii.gz, nifti_lnS0.nii.gz, and nifti_exit.nii.gz. The DTs are exported to a 5-dimensional image with six components, with | intent code NIFTI_SYMMATRIX. The other two images are the log of estimated unweighted signal in each voxel, and the exit code (see the man page for modelfit for more information).

The output image dimensions and the transformation to physical space are defined by the image passed with the "-header" option. For the exported data to work correctly, you need to ensure that the image you pass with -header is in the same physical space as your DT data.

7.  Other ways to fit the diffusion tensor

The dtfit command uses unweighted linear least-squares to fit the diffusion tensor to the log measurements. It is quick and easy, but is not the most robust way to estimate the diffusion tensor. The basic fitting procedure in dtfit is fine for quick visualization of FA and MD. More serious quantitative applications should use better estimates of the diffusion tensor, which are still simple, but take longer to compute.

A significant improvement comes from using a weighted linear fit, as originally proposed by Jones and Basser MRM 2004. The Camino command wdtfit performs such an estimation and works in exactly the same way as dtfit:

fits a positive definite diffusion tensor in each voxel using non-linear fitting. The command outputs various INFO messages like this:

These messages occur when the nonlinear optimization cannot converge for some reason. A linear fit will be done for the affected voxel. You will see a few of these, but there shouldn't be thousands of them. It's especially important to define a brain / background mask when doing non-linear fitting, to avoid flooding the terminal with these messages and slowing down the reconstruction by trying to compute a nonlinear fit to background noise.

Camino also implements the RESTORE algorithm (Chang et al MRM 2005), which fits the diffusion tensor robustly in the presence of outliers. The restore command implements the method and works in a very similar way to dtfit:

The restore command requires one additional argument, which is an estimate of the noise standard deviation ($SIGMA). You can estimate this from multiple b=0 images if your protocol includes them, using estimatesnr. The Camino command datastats is also useful for this.

You will probably need to experiment with $SIGMA, the optimal value depends on the resolution of your data and its noise characteristics. The noise standard deviation from estimatesnr is a good starting point, but can cause too many measurements to be rejected as outliers. Larger values of sigma makes the algorithm less likely to classify a data point as an outlier.

From this section onwards, we use a data set from the diffusion imaging group (DIG) in Copenhagen, which you can download from here: http://dig.drcmr.dk. From the DIG homepage, go to the downloads page and scroll down to the ActiveAx data set. Click on the link to "Download the ActiveAx ex vivo dataset". You will need to register to access the data. Please follow the requests on the DIG site regarding citations if you use their data.

Once you have access, you will see that the data set consists of four files. We will be using just this one:

Download this file and convert it to Camino format using the image2voxel command:

The DRCMR_B1925 data set has 90 diffusion weighted images and 3 unweighted images. The 90 gradient directions come from the electrostatic point sets contained in Camino (see the PointSets directory) and we can use the pointset2scheme command to generate the schemefile:

Alternatively, since we know more of the imaging parameters for this scheme, we can output a more detailed description of the scheme:

Either of the two scheme formats will work for DTI and will produce the same results. Some Camino programs (such as the diffusion simulation) require the more detailed scheme description.

Now we have all we need to fit the diffusion tensor and generate some parameter maps.

You can now view the images in an Analyze viewer of your choice. For example, here is a screen shot of DRCMR_B3091_FA.img viewed in itksnap: 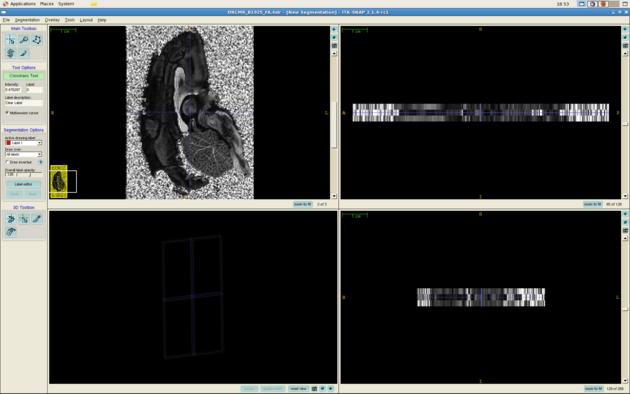 The command dtshape produces a range of other simple parameter maps derived from the diffusion tensor.

11.  Visualize the RGB image with Matlab and pdview

Next, we'll compute the eigen system and extract some information from it.

Now we can load this into MATLAB for processing. Here we'll simply generate the colour-coded direction map from DRCMR_B1925_PD.Bdouble:

Here is the image

The colour encoding that appears for this data set is slightly unusual. By convention, red corresponds to left-right orientation, green to anterior-posterior and blue to inferior-superior. However, here, the corpus callosum, which has left-right orientation in the brain shows up blue. This is because the slice direction for this acquisition is along the left-right brain direction, ie slices are sagittal, rather than along the inferior-superior direction, giving axial slices, which is more common for human imaging. This can be fixed for display purposes by permuting the axes of the rgb

Looking at the image in pdview, we can see a more important problem, the principal direction vectors do not point along white matter fibres in the way they should. The vectors in the midsagittal corpus callosum correctly point out of the image plane as expects, but cingulate and cerebellar fibers have the wrong orientation. 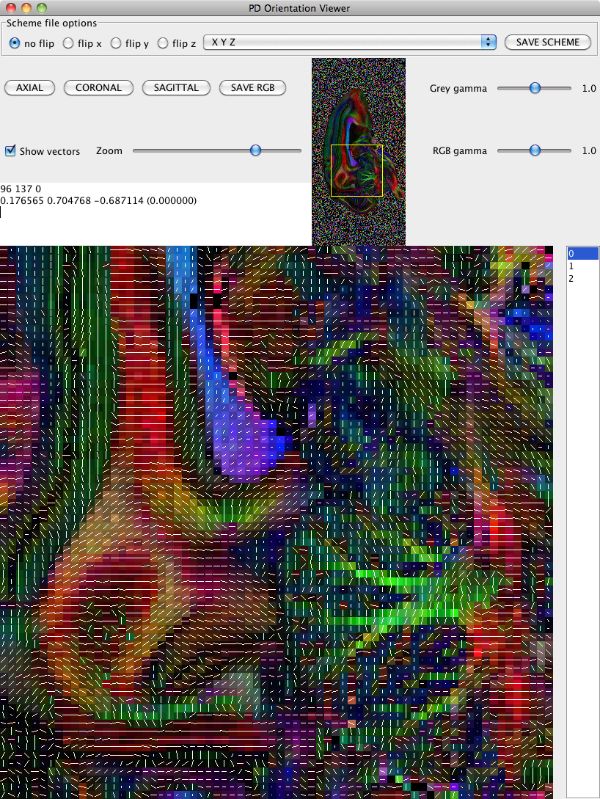 Note the extra panel in pdview listing scheme file options. You can figure out what permutation to make by thinking carefully about the image and gradient orientations, but often it is easier to do empirically once you know what you are looking for. Here, if we set the drop-down menu choice to "YXZ" instead of "XYZ" (specifying that the first and second schemefile coordinates are swapped compared to the image), which gives us 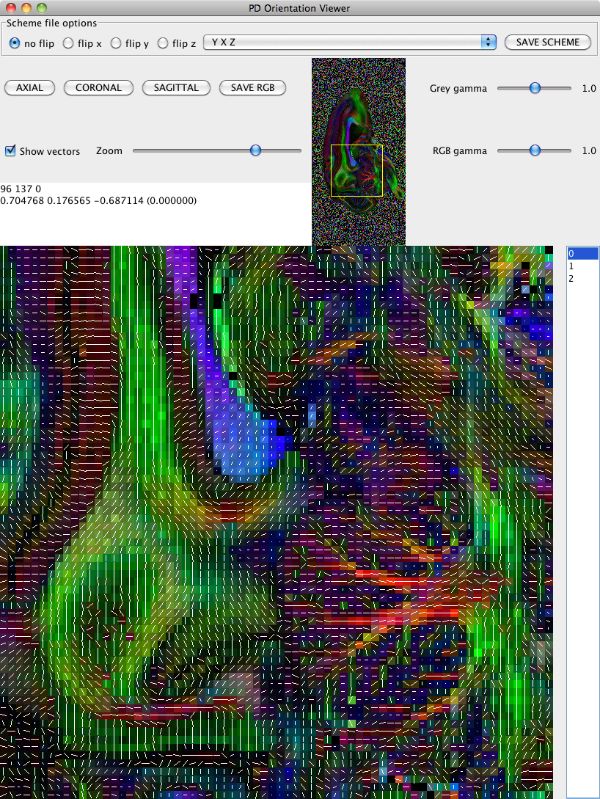 Now we need to save a version of the schemefile with the coordinate system corrected to match the image. Click the "Save Scheme" button and save it as DRCMR_B1925_Corr.scheme. Saving the scheme file does not alter the data, so we need to recompute the diffusion tensor with the corrected schemefile and recompute the eigensystem. We'll pipe the commands together to save disk space